The Museum of Berlin has acquired Manfred Hamm’s archives. 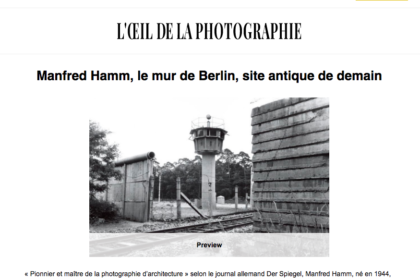 “With the support of the Berlin Senate and the Cultural Foundation of the Federal States, the Berlin City Museum has acquired the archive of the photographer Manfred Hamm. What a boon for Berlin” was the headline of Ingeborg Ruthe in the newspaper “Berliner Zeitung” on 10.11.2020. This news has been the subject of numerous articles in all German print and radio media this week. But why such a craze? This recognition is not new; the German newspaper Der Spiegel already saw in Manfred Hamm, I quote the “Pioneer and Master of Architectural Photography”.

On the French side, during our two gallery exhibitions in 2017, Manfred Hamm’s photographs on the famous Bibiothèques, Concert Halls and Stock Exchanges and in the second part on the Berlin Wall, the press was not modest with notably this article published in the specialised magazine “l’oeil de la photographie” (see article).

But who is Manfred Hamm? He was born in 1944 near Zwickau in Germany. In 1955, he fled with his mother to the West, and that’s how he began to walk the streets of West Berlin, his adopted city or “the theatre of the absurd wall”, as he called it. It was thanks to his shots of industrial buildings that looked like clichés of contemporary archaeology in which mankind would have disappeared – nicknamed “the ancient sites of tomorrow” – that Manfred Hamm became famous.

The city of Berlin has thus acquired a unique and priceless collection of images on the history and architecture of the city photographed between 1972 and 2010. Almost 40 years of documentary and artistic photographic work with his lifelong friend, his heavy large-format camera “Plaubel PS 7/433”. It doesn’t matter for Manfred Hamm if he has to move around with heavy equipment and spend hours in front of his lens trying to capture the “T” moment, Manfred Hamm doesn’t like working with a digital camera because for him the magic doesn’t happen while his faithful Plaubel gives him an aestheticism, extreme sharpness, lighting and careful framing with breathtaking precision. .such as a focus on the bowels of the buildings, allowing a renewed vision of architecture, highlighting the internal structure of the premises, with an aesthetic and self-sufficient perception of architecture.

Manfred Hamm was able to capture moments of history by adding his declaration of love for the Berlin capital and his contribution to this historical upheaval by enriching the collection of the Berlin City Museum.