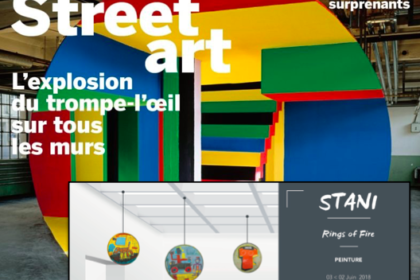 In his exhibition entitled “Rings of Fire” the artist Stani reinvents himself using an unusual medium: drum skins. These synthetic circular trays were originally used for musical instruments. These new works echo Berlin’s electronic culture in particular, as the artist is a great music lover. Stani is an artist who has developed an aesthetic approach of his own. Despite a very personal universe, he draws his references from great masters such as Basquiat. The use of bright and contrasting colours combined with a graphic and dynamic line bring depth to his paintings. The combination of acrylic and pastel creates a rich and generous pigmentation highlighting the characters in his works. Halfway between art brut and urban art, Stani gives rhythm to his paintings by adding chalk words, similar to juvenile scribbles, creating a universal language imbued with the street. This artist maintains a fascination for letters and words. These writings are not meaningless, they are full of hidden meanings. We can cite as an example the word “wild” which is present several times in his paintings or the word “emotion” used satirically in his painting “King robot”. With an instinctive and energetic gesture he depicts his daily life, giving his paintings an autobiographical character. It is in the street, through his encounters, his travels and his feelings that Stani feeds his art and finds an abundance of supports. His works thus echo his past. He improvises from recurring subjects such as his dog Doggy or his feminine inspiration and muse Tina. He chooses to develop a free, primitive and anarchic writing to evoke popular culture, urban art and street energy. The geometric shapes create a robotic universe. Pictorial primitivism dialogues with a post-modern universe. His works are not only aesthetic but also thematic. He approaches societal facts with a light tone in order to convey and express libertarian messages. The artist uses his art as a medium of communication to express his philosophy of life and his rebellions against modern society. Indeed, we can think of the phrase “life is a fake” from the painting “Music Paradise”. For the “Rings of Fire” series, the artist renews himself by painting on an atypical support, that of circular trays made of synthetic skins that were originally used for musical instruments such as drums. These new works echo Berlin’s electronic culture in particular.