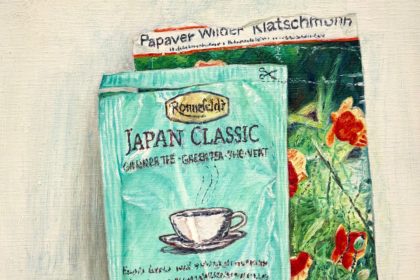 In this new series entitled “Facing reflections”, Sabine Christmann harmoniously and ingeniously arranges everyday objects such as advertising bags, bottles and food products on a clean background, while playing with reflections. Opting for a hyperrealistic representation, she offers the spectators elements unusually represented in painting, taken out of their context, while working on the rendering and texture of glass, crumpled paper and transparency. Cold tones and blues dominate these compositions, which are reminiscent of modernised still lifes, where all that remains is the packaging and the brand, symbols of Western consumerism. The objects are positioned on a surface that plays the role of a mirror, and the attention is focused on the lines created by this doubling and on the shadows. There is a real interaction between the elements that seem to have been placed there by chance, and a new consideration of the objects to which the artist gives an artistic dimension. Sabine Christmann does not focus on a quest for objectivity, but on the interaction between objective and subjective perception, and on the general rendering given by individual elements. The latter are assembled to create small stories while appealing to each individual’s own reality, thus extending the meaning given by the artist herself. Everyday objects appear as characters on stage, they take on attitudes, seek proximity or distance, even if their position is fixed from the beginning, the painting process is never planned and leaves visible traces on the rough surface. “In the quiet, objects from the consumer world appear as people on a stage. The “play” they play remains ambiguous and intriguing. The painting itself, which is sensitive in its materiality and surface stimuli, and the use of its own perception are of paramount importance to me. “The stories invented by Sabine Christmann are varied, sometimes intentional or coincidental, depending on who is contemplating her work. The artist claims the impossibility of an objective representation in painting, which on the contrary carries the subjectivity that flows unintentionally during the creative process.