by Galerie Charron / Friday, 23 May 2008 / Published in Exhibitions 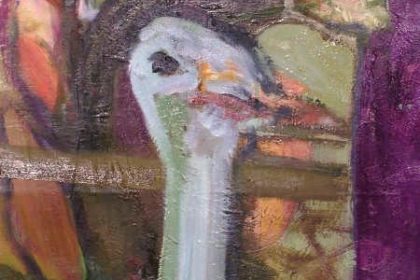 The painter Romain Théobald was born in 1971. He is a graduate of the National School of Fine Arts in Paris. During a stay in Norwegian Lapland in 1997, he discovered the existence of shamans, the intercessor beings who communicate with the forces of nature. This encounter is crucial for the artist and the figure of the shaman becomes the central point in his work as well as in his personal universe in which the practices of the painter are assimilated to those of the shaman. There is in him like a shaman. He hears inner voices ordering him to enter into communication with the forces of Nature and Art. Every journey through the steppes is also a journey within oneself. Nomadism initiates the blossoming of new artistic forms in new territories. The paintings of Romain Théobald become territories of creation where the painter composes with the 4 fundamental elements of matter: earth, water, air and fire. The artist associates them as pictorial touches. The shaman then becomes a terrestrial, aquatic, celestial figure, a being of fire who grasps the immaterial. Romain Théobald portrays the artist as a shaman!