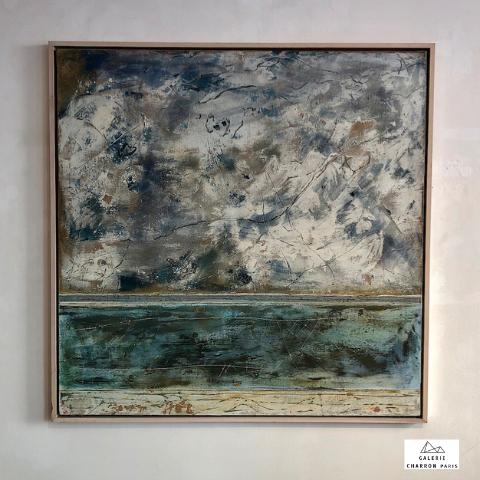 Born in Béziers in 1924, Georges Noël grew up in Pau. After studies in painting and engineering, he worked as a designer-draftsman for the aeronautics firm Turboméca for nine years. In 1956, he moved to Paris, to devote his energy to painting. Dubuffet and Klee, Pollock and Fontana were artists who impressed him from the start. The photographs of "graffiti" by Brassai were also a revelation. His interest in drawing and "automatic writing" (although he was not interested in Surrealism) led him to invent a medium--consisting of powdered pigments, sand and glue--on which to incise his personal sign-language. The support could be rough or smooth, depending on the artist's intentions or mood; it served to capture the unfolding of his graphic impulses, as they scratch the surface, or even tear these layered grounds. His vocabulary of signs betrays his profound interest in the magic and mystery of prehistoric, archaic, and tribal cultures. The term "Palimpsest," his generic term for his paintings, refers to the word's original meaning of writing, rubbing out, and then writing again, initially on tablets or parchments. Here, the artist superimposes and effaces his fields of color and clusters of signs, evoking layers of memory, emotion and meaning. Whereas Georges Noël's fifty-year career shows an unusual diversity of styles, his textured grounds and energetic graphic interventions remain constant throughout. His works on paper (with some exceptions) show the same spontaneous handwriting, sometimes on wash, sometimes on collaged or built-up surfaces. An inveterate worker, he also tried his hand at sculpture, and has produced several series of prints (mostly wood block engravings). Georges Noël was represented by the Galerie Paul Facchetti in Paris from 1957 to 1968, during which period he exhibited regularly in Europe and the United States. At the time, his painting was associated with the French and Italian "informel" movement. The artist's use of paper laid down on canvas or torn and collaged newspaper may be seen to echo his admiration for Fontana, not to mention his friendship for the French artists of his generation Raymond Hains, François Dufrêne and Jacques de la Villéglé. In 1968, Georges Noël moved to New York where he was represented by the Pace Gallery and the Arnold Herstand Gallery. During his American period, his work became more structured, geometric and architectonic. In 1983, he returned to France to prepare a major exhibition at the Abbaye de Senanque, followed by a retrospective at the Centre National des Arts Plastiques in Paris in 1985. His late stylistic development shows a synthesis between the gestural impulses of the early work and the more structured compositions of his New York period. From this time foreward, he exhibited regularly in Italy, Germany, and In Japan where his work is particularly appreciated. Georges Noël's most recent Parisian exhibitions were held at the Galerie Thessa Herold in 2008, 2010, 2013, and 2017, and at the Galerie Catherine Putman in 2008, 2009 and 2011. In 2015, the Musée d'Art Moderne de la Ville de Paris organized an exhibition on the occasion of an important purchase and gift. A prolific artist, Georges Noël's work may be found in private collections and institutions throughout the world. Source: artist's official website