by Galerie Charron / Saturday, 01 May 2010 / Published in Exhibitions 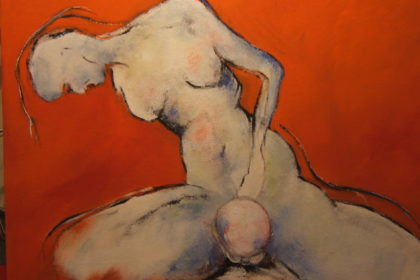 Galerie Charron welcomes the expressionist artist GUERINEAU on the theme “Scream from within, homage to Edvard Munch”. The selection of works to be presented reflects the artist’s intention to express, through figurative symbolism, the suffering and misunderstandings of a life that haunts his spirit every day. “Guerineau’s characters offer us a macabre dance and highlight the grotesque nature of existence in a deliberately morbid vein, with emaciated figures, to send us back to our own questions about the meaning to be given to things. On a chromatic level, he remains faithful to his palette reduced to raw primary colours, as were often those of Kirchner and the artists of Die Brücke, where red predominates most often. “From canvas to canvas, he lays his emotions down, always in search of external power. While deepening his work, he is confronted with a sense of duality: he now needs to capture the spirituality of the inner world. This work then gives birth to the series of his paintings in which vanities appear. Guérineau’s work is at the meeting point with the worlds of the past, those of the mists of time that carry the breath of great inspiration. The artist creates about the sufferings and misunderstandings of a life that haunts his mind every day. Guérineau imposes his vision in search of truth through an X-ray of the soul through these disturbing beings who flee the mass of colour juxtaposed by the vivacity of the brushstroke on the canvas. He no longer seeks to magnify the human body as in the time of the Portraitist that he was, but to tackle something deeper, to bring out the soul of each one of us where the flesh would only be a superficial and embarrassing addition. We are thus confronted with a liberating uncovering of ourselves. This expressionism translates itself with evidence as a birth, a rebirth, a mirror reflecting our own questioning.