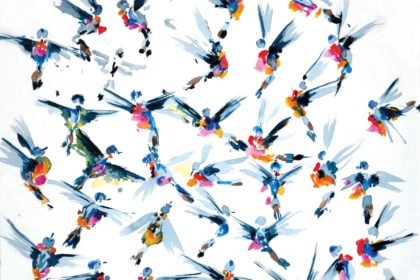 A French artist born in 1964, Olivier Dromel has always taken the decor of our lives as an essential characteristic of our consciousness, our inner “self” that reveals our appearance. Exhibited in 1990 at the Barcelona Biennale, he then staged bouquets of faded flowers and interior decorations of houses, in order to sensitize the viewer to a total introspection of our environment revealing our existence. In the following years, he moved to Switzerland where he worked on a new concept of photography called “free”. In 2010, his work focuses mainly on painting and watercolour on canvas. Through these mediums, he revisits the theme of landscape and naturalism. In 2014, he intensifies his research and from then on, the decor of his large watercolours is no longer the fruit of man’s imprint but becomes the origin of his existence. In the “Birds” series, the birds are staged like wallpapers, both actors and spectators of man’s life. In his large-format, brightly coloured paintings, with both squared and random lines, the birds seem to escape from them and plunge the spectator into a feeling of escape and contemplation. In 2011 and 2012, his works are presented at Drouot, where he reaches a level that gives him a status on the international contemporary art market. Galleries exhibit his new series entitled “Happy Birds” in Paris, Cannes, Monaco, Tokyo, Innsbruck, Montpellier, Bordeaux, Strasbourg? In 2015, his paintings from the “Water colours” series are presented at a major exhibition at La Grande Motte, then at the Magrez and Mercedes Foundation.