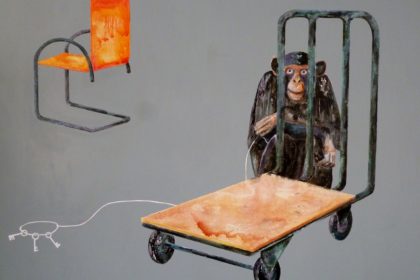 In Mickaël Doucet’s “Philomates” series, the spectator struggles with visual codes around the perversion of a situation. Rather than painting suffering and its representation, Mickaël Doucet balances his work, in an iterative way, around three elements, namely a chimpanzee, one or more manufactured objects and a molecular model of human DNA with an apparent gentleness that reinforces the subject around the notion of freedom, emancipation or progress. The last canvas in the “Philomates” series leaves the viewer stunned: this chimpanzee holds the keys, those of progress or freedom?