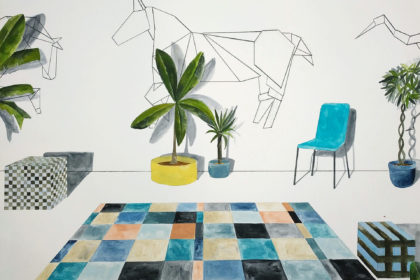 “Lascaux”: Following the success of the thematic exhibition Lascaux China 2018 in Wuhan and Hangzhou (China) in early summer 2018, Galerie Charron has chosen to propose a variation on the same theme entitled Lascaux Paris 2018 in France. It will exclusively present an exhibition of oils on paper in the form of small triptychs and diptychs in the form of contemporary cave interiors, as imagined and conceived by the painter Mickaël Doucet… At a time when Humans have found the means to express their sensations or emotions through drawing, It has blackened the walls of the caves and caverns in its surroundings … We all know the fabulous testimonies of thousands of years ago, the imprints of prehistoric men left on the walls of the famous caves of Lascaux, Altamira or even more recently the Chauvet cave in France. This imperious desire to communicate, through drawings on the walls, will perhaps remain forever bathed in mystery. The first appearance of Art was therefore between 35 and 40,000 years ago: Parietal Art. Since then, it has developed through dozens of different civilisations: from the Byzantine Empire to Ancient Egypt, via Ancient Greece and of course China. So many testimonies of human creativity over the centuries, through different cultures and spiritual approaches … From charcoal charcoal on the ungrateful walls of caves, to the hieroglyphs precisely traced on Egyptian papyrus, to the famous Chinese inks gracefully created on rice paper, the means of expression have become numerous and complex. The Lascaux Paris 2018 series is a work of pictorial balance; it revolves around the theme of the pictorial remains of prehistoric caves, through the representation in charcoal and black chalk on the white walls of very contemporary dwellings of drawings of animals; the painter wanted a very graphic version of these represented animals which obviously recall the cave drawings but with a more Asian touch. This Lascaux series is moreover in the continuity of the previous series named Shao Huo where these paper beings, like totems or strange and cathartic sculptures came to haunt the foliage outside the reassuring dwellings. We find in the new series the remains of the plants of the previous series, this time staged with grace and a certain idea of beauty, arrangement and harmony with the furniture dear to Mickaël Doucet, the colourful carpets with various motifs or the chairs that we now find in his works as a real signature. The whole is composed in such a way as to let life circulate in the work, like a breath of the spirit coming to inhabit the paper on which the painting comes to leave its mark.