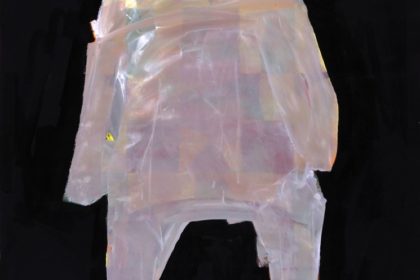 Throughout its history, painting has accustomed us to its various uses: symbolic, religious, historical, ideological…. The artist, the painter, faced with this long and complex history makes a choice, adopts a posture. Marcel Polin has chosen. He is an iconographic rather than an iconological painter, a neo-formalist; the image, the representation, he only uses it formally. Background, form, colour, drawing, surface create his vocabulary and his application. Marcel Polin is somewhere between tradition and modernity: Tradition through fidelity to the painting as a window, pierced, put into an abyss. His modernity is in fact, by his critical posture. Marcel Polin’s work proceeds intuitively, searching for the first impulse, the first trace, the first element that will induce a form, a pattern. The work continues by successive overlaps, a form of repentance of which no trace remains. In this, Marcel Polin is not very interested in texture because these overlaps create their own. The three-dimensional illusion shown in his last paintings does not contradict the flatness of the surface of the canvas. These are presented under the illusory aspect of large folds of space. A network of lines supports, superimposes or contradicts the folds and folds of these coloured and geometric fields. Colour, its saturation and luminance play a major role in this effect. For Marcel Polin, an excellent colourist, colour is not a science, but an intuition, an experience, a way of thinking.