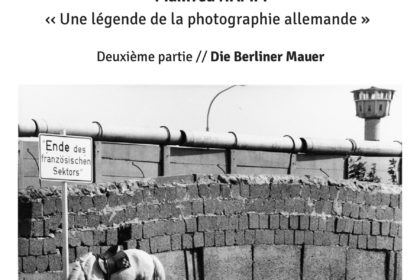 Galerie Charron presents Manfred Hamm’s photographs from his series The Berlin Wall. “Pioneer and master of architectural photography” according to the German newspaper Der Spiegel, Manfred Hamm, born in 1944, became famous with his shots of industrial buildings looking like shots of a contemporary archaeology in which humanity would have disappeared – “the ancient sites of tomorrow”. Manfred Hamm does not like digital. For him, magic does not happen with digital photos. His secret is patience and his lifelong friend, his Plaubel camera. A photographic work in search of aestheticism, extreme sharpness, perfectly lit and carefully framed with breathtaking precision. Manfred Hamm is one of the photographers who knows Berlin best. In December 1976, he set out with the project of photographing the tomb of Theodor Fontane and found himself in front of an insurmountable obstacle, the Berlin Wall. He then decided to take this obstacle as a lens. From 1976 on Manfred Hamm documented the Berlin Wall, which was gradually transformed for him as a kind of theatre set with graffiti and surprising motifs such as the horse, for example, which had no idea of the threatening nature of this deadly building. His photographic work is a documentary like an “ethnologist” would have done. I always wanted to be an ethnologist,” says Manfred Hamm, “but one of my teachers dissuaded me from doing so because I was too romantic. Manfred Hamm was able to capture moments of history… during this period by adding his declaration of love for the Berlin capital and his contribution to this historical upheaval. Manfred Hamm’s photographic work came to an end when Kodak abandoned the production of the films so dear to Manfred Hamm, which allowed him to create a photographic depth never achieved with any other film.