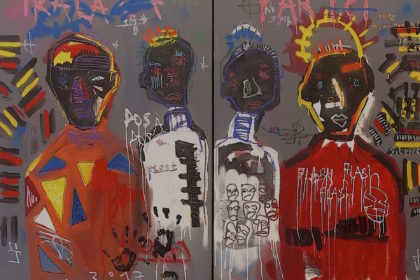 Ecce Homo : Wherever the spectator is when he is visually confronted with the productions of the painter Jazzu, he suddenly has the impression of being parachuted into a spatio-temporal sphere and of being part of this gang of young teenagers discovering the cave paintings of the Lascaux caves. The creations of this adventurous artist are rich, dense, meaningful in the manner of the written expression of the first men. In a free and fusional way, the artist transfigures on the canvas the feelings of his human condition. We see faces, bodies of women and men, animals, symbols, words, letters, numbers. In Jazzu’s paintings – in the manner of Champollion discovering hieroglyphics – the common man scrutinises these elements with reminiscence, allowing him to construct his own mythologies. The calligraphic writings, the variations of the tracings, the hand marks, the doodles, the use of a diversified colour palette and the symbols brought together by the artist summon the sensitivity of a collective memory. Some may see references to history – historical but also artistic, allusions to contemporary current events, while others may project their personal stories. This free, raw, spontaneous painting, in addition to being the heir to the rock paintings of the first men, can also be seen as a tribute to the style of urban art, that of: graffiti, tags, street-art, rebellious and revolutionary cries, insubordinate actions. Jazzu seizes the canvas like a graffiti artist takes it from his wall. He marks his territory, he immortalizes his ideology and his positions. He makes visible his feelings towards the world in an anarchic and dreamlike way. The aesthetics of the canvases is characterised by a will to “all-over”, the subject of the painting seems to extract itself from the shackles of the painting, to continue beyond the limits of the frame in the off-field. This technique energises and brings to life the artist’s productions whose rhythm seems to be set by the hazards, the unexpected and the overflows of our daily lives. Following the example of his counterpart Basquiat, Jazzu’s canvases are of different formats, the tradition of perspective and depth is scorned in favour of a flat experimentation of the central subject of the painting, the claw of the drawing is fast, impulsive, emancipated, varied and the themes are inspired by the veracious and voracious aspects of life. Jazzu is one of those modern artists whose so-called simplicity in using painting as an outlet continues to make people dream.