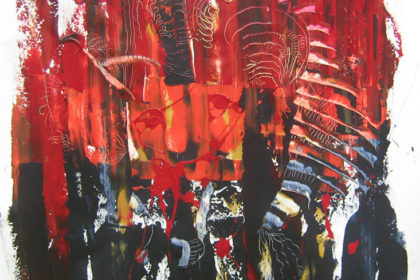 Hélène Szumanski of Polish origin was born in 1962 in Puteaux. Before starting art and communication studies at Paris I-Saint Charles in 1983, she always drew and painted with a need for creativity that still guides her today. Drawing courses in Paris in 1987, painting courses in 1989, theatre at the Châtillon conservatory in 1981, then in Pierre Spivakov’s class in 1986, she hesitated between theatre and painting. This double training was of great use to her, especially when she was in charge of missions for various NGOs, she set up artistic expression workshops in Bosnia or Albania and today still in Bourg-la-Reine in her pedagogical activities with children with behavioural problems. In 2003, her meeting with the Albanian painter Natacha Bega had a definitive influence on her work. Abstraction imposed itself on her as a means of expression, she then found all the essential elements for her: freedom, spontaneity… violence. Back in France, on the advice of Bernardino Toppi, a guest at the Salon Ile-de-France in 2005 where she presented her paintings herself, she decided to mix gold with her usual palette, the three primary colours red, blue and yellow. The presence of this new element iridescent and warms the paste in her abstract works as well as in her paintings depicting horses. The horse, an animal that is dear to him, his grandmother taught him to ride at the age of 6… it is a concentrate of energy and one of his great sources of inspiration such as the city, light, noise, music, jazz … The revelation of certain elements of the family past (resistant parents and deported during the Second World War) orientates his work. At the beginning, paradoxically, she needs silence, then when she feels her composition, there is the music, especially jazz, which for her is indispensable. She then decides to merge music and painting by creating a four-handed work, to paint while the pianist Olivier Beillet Le Béhérec, a long-time friend, improvises. They linked their two sensibilities during a first performance in Bourg la Reine at the CAEL on 24th October 2009. Hélène Szumanski was awarded a “First Prize for Rapid Painting” at the exhibition of her paintings in 2007 at Longpont sur Orge in Essone.