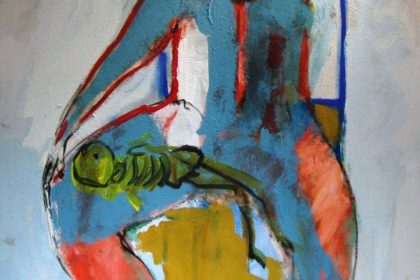 “The emblematic Minotaur” by the painter Francky Criquet As a young man, he was fascinated by the art objects of all kinds that he saw around him and especially by drawings and paintings. This experience marks him forever and gives birth in him to the desire to draw, paint and model for his pure pleasure with great precocious talent. In 1978, at the age of ten, he created a mural fresco for the primary school of Verron where he was a pupil. He painted another one for his secondary school in 1980. That year, at the age of twelve, he won first prize in the Young Painting competition organised by the city of Le Mans. His drawings are exhibited the following year at the town hall of La Flèche. Francky Criquet carries out his own apprenticeship by restoring and retouching engravings and paintings on the family building site. From the age of 18, he decides to sell antiques on numerous markets and antique fairs. He sometimes restores old paintings for antique dealers. Some paintings end up being exhibited in museums, such as in Nantes, or with collectors. Besides this work, he writes poetry, short stories, is interested in theatre, gives courses, draws, paints, sculpts, makes ceramics and exhibits in Nantes (at the Transbordeurs in 1980, at the Atelier La Gobretière in 1992-93, at the Atelier d’Art d’Art in 1993-94). In 1995, Francky Criquet leaves for Spain where he works for a year in Andalusia. He paints in the studio of Julio Fernandez Ceballos Montalban who becomes his painting master. The following year, he emigrates to England. There he produced more than three hundred paintings which were later sold in the United States. At the end of 1996, he returned to France and became involved in the architecture and rehabilitation of the troglodyte area he had designed in Maine et Loire. This did not prevent him from painting and exhibiting in Paris, Lyon and Marseille. Indeed, he never stops creating: drawing, painting and sculpture are for him a daily necessity, an unavoidable part of his life, also punctuated by presentations to the public, amateurs and collectors. In 2003, exhibitions were organised by his gallery owners in Brazil, at the French Embassy in Sao Paulo, in the Netherlands in Megen and in Italy. The following year, his works were shown in New York and Miami. From 2005 to 2008, he exhibited regularly in China. His gallery, Sangshan Art, organizes numerous exhibitions in Shanghai, Beijing and HangZhou. In the same period, he continues to exhibit in the biggest cities of France: Paris, Marseille, Lyon or La Rochelle. In 2010, he starts a collaboration with a new Italian gallery which organizes several exhibitions in Italy, Rome, Montefalco and Brescia. The Yves Klein Archives, avenue du Maine in Paris, are organising an exhibition of his paintings and ceramics. The following year, Francky Criquet devoted himself fully to his art in his studio, creating sculptures and paintings. In 2015, he regained his independence and decided to work with various galleries in Lyon, Angers and Paris. Many projects are in progress, but that’s another story.