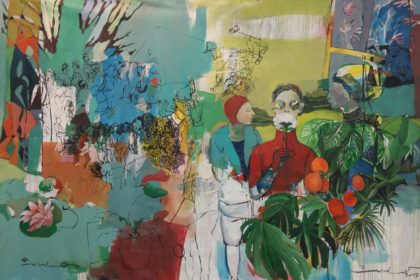 Golnaz Afraz was born in Tehran in 1981. She comes from a family of Iranian engineers. Already as a child, she had a true artist’s soul. Wherever she went, she took her drawing book with her and drew everything, everywhere, all the time. Despite a university start in mathematics, in the early 2000s, she definitely chose the field of painting, and joined the faculty of Azad in Tehran where she obtained a degree in painting. Then, she continued her studies in Tehran with a master’s degree in plastic arts at the University of Tarbiat Modarres obtained in 2007. Golnaz is a member of the Association of Iranian Painters in Tehran. In 2011, she moved to France, enrolled at the University of Strasbourg and graduated with a second master’s degree in visual arts. Since then, she has participated in several solo and group exhibitions in Europe, the United Kingdom in 2020 and Asia. Her work is tinged with references to the Iranian miniature, she uses them in her paintings by taking up the variations of plan, but also the use of bright colors and contrasts. During her university studies, she met the American artist R.B. Kitaj, she admired his way of telling a multitude of stories in a single painting or drawing. And this is what she will use in her paintings. Her works are superimpositions of images and stories, where the characters interact with each other. She creates her scenes on paper and on canvas and assembles them like a filmmaker. In her art work, she wants to make the viewer reflect on the true meaning of life, on interpersonal relationships, nature and the environment. The larger the painting, the more freedom it offers to see more clearly but also more broadly, and thus to express herself more widely. She can paint several planes, mix them, mix them in order to tell a multitude of stories and let a profusion of life scenes show through.