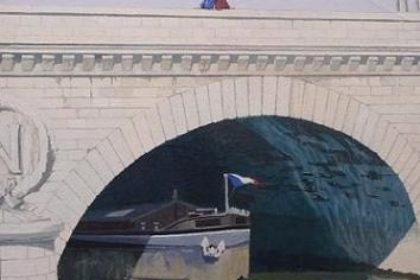 A couple’s views, one on intimacy, the other on the reality of the world. The same passion for everyday life: Fabio Rieti and Laurence Aillaud

A look at daily life full of love, humour, optimism and hope, which is reflected in a warm and luminous colour palette for Fabio Rieti. Renowned artist in mural art, painter of life, of the city, who takes us on a journey into his world where family, music, literature, urban scenes of his three homelands (Italy, United States and France) are mixed.
Tender and amused look of a mother who observes her children and grandchildren and “pins” them in their favourite postures for Laurence Aillaud. A renowned artist in monumental sculpture giving life to a giant bestiary: snake, hippopotamus, sheep, turtle, deer, or to a pear, an apple … before devoting herself to interior sculpture.
Fabio RIETI born in Rome (1925 – 2020), this traveller from three countries – Italy, the United States and France – is a man of the cities. He dedicated his life and work to them. It was in the United States that his artistic career began. In 1948 he migrated to Italy and during this period took an interest in ceramics, which later led him to public art. For many years he thus “sailed” between the United States and Italy, but it was in 1956 that he decided to settle in Paris. Fabio RIETI has exhibited his paintings in many cities: New York, Rome, Milan, Venice, Amsterdam, Chicago, Stuttgart, Paris. Fabio RIETI’s career as a muralist began with the colouring of large urban ensembles such as in Bobigny. It was the beginning of a fifteen-year collaboration with Émile Aillaud. He worked on all the architect’s later projects such as the ensembles of Chanteloup and Nanterre. Then he became a master in the art of creating large mosaics such as in Courbevoie or Nanterre. The pedestrian walkways of the halles gave him a certain notoriety that propelled him into the world of urban mural art. Since then, he has scattered his works all over France: Paris, Dunkirk, Le Mans, Nice, Marseille, Juan les pins etc.