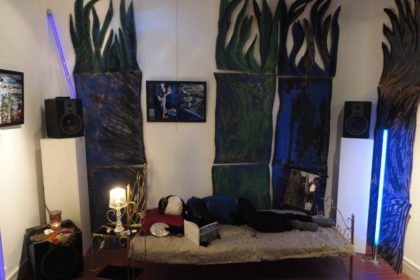 Installation & performance Les rêves rêvés, illustrated and filmed by Eve by Eve Patris Schaeffer, former model for Vogue Italia, daughter of Gérard Patris, author and filmmaker and granddaughter of Pierre Schaeffer, direction ORTF at Galerie Charron. From this performance was born the first film of Eve Patris Schaeffer —>> Les rêves révés, illustré et filmé, d’Eve, montage by Frédéric Bacala where Eve Patris Schaeffer delivers us a work full of sensitivity; she films and illustrates her dreams, her soft voice contrasts with these collages which literally plunge us into her nights which are not so “dreamy” as that. I invite you to plunge into her unique universe, touching and full of questions.