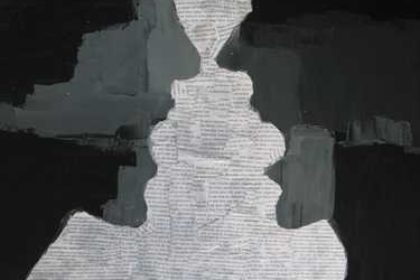 Corinne Malfreyt – Gatel has been drawing and painting tirelessly since childhood. Since the first pencil strokes, she has been attracted by human matter: faces, bodies, their expression and movement. At the age when one chooses a profession, society and the spectre of unemployment lead her towards a classical path, far from her passion for shapes and colours. It is only when she reaches maturity that she decides to give up her reasonable professional activity to devote herself to her rage to create. These years of repressed artistic expression gave birth to the series of expressionist paintings “The Gorgonians”. In the manner of E. Munch’s “scream”, her feminine jellyfish faces scream. The colour palette is reduced to raw primary colours, as were often the colours of Kirschner and the artists of Die Brücke, and red predominates most often. In “The Gorgonians”, the knife leaves a violent, sharp mark. Similarly, in the nudes of Corinne Malfreyt – Gatel, with its rapid and spontaneous drawing, the angular line of Egon Schiele is easily found. These faces grimacing with gorgonians (“The Scream”, “Red Gorgon”, “Black and white Gorgon”) seem at last to exorcise a long silence, the silence of appearances (“Gorgon in you”, “The silence of Gorgon”). This break can be read in the audacious juxtaposition of colours and in the liveliness of the touch. This feminine expressionism is clearly expressed as a birth, a rebirth (“Metamorphosis”). This procreative energy inhabits the artist in her work, as in life (she has four children!). In the manner of the “snake-women” in her paintings, the artist operates a violent and radical transformation before our very eyes. This moult is symbolically dangerous since the eye of “The Gorgon” petrifies her enemies and why not herself (“The Mirror”). Isabel Mirandol