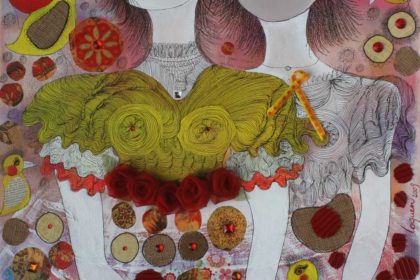 In Claudine Loquen’s work, digression is always present. It even becomes a formal necessity as if painting itself were a drift to which the artist cannot give meaning. It is a suspended bridge over the void and devoid of any parapet. The creator loses her compass to seize us with vertigo. She has no strategy, even if occasionally there may be a kind of programming. But this gives the work a density within its lightness. Jumps and leaps in the space of the canvas become disjunctions and bifurcations in a form of picaresque as the artist moves from one subject to another. From “beaches” to “beaches”, one passes from one universe to another through breaks in tone. And this work is fascinating. The artist finds himself on the run on embankments and side paths. Yet there is neither escape nor mental confusion. Everything is the result of a very precise pictorial mechanics. Indeed, working on his motif, the artist moves forward as if by jerks and turns, but the result remains something very constructed, even if the whole is sinuous, digressive; it’s chance manoeuvred, like a kitchen made from telescopes. But more than looking for a playful effect, the artist finds an anti-rhetoric that diverts ambient images. Less militant than ironic (and so much the better) Claudine Loquen opens her painting to pleasure. The idea remains to “hack” the rhetoric, to deliberately scratch the images because for her and in her painting there are no things that are not touched, that never remain sacred things. Her painting is therefore exciting for the eye as well as for the mind. The pictorial digressions give leads that go in a more important direction than the event. Against the literality the artist sets his demands in an almost “obscene” way. In this sense his painting is performative: it acts, it becomes a pragmatic form of thought but which escapes pure reason. And if the artist arrived in her painting with her cultural and artistic baggage, she has voluntarily forgotten it in a corner of her studio while not closing certain doors. But her concern is not to be well in the time line. In her painting it is necessary that it overflows. And she tries to take this into account. Her cavales don’t only “talk” about cavales, they show in depth. And the unconscious that surfaces has more darkness but also more light than one might think. Such an approach is therefore rare because it raises some fundamental problems to which Claudine Loquen does not necessarily give answers. But it is different from ambient production. Loaded with her digressions, she humorously refuses any crystallisation of stylistic processes. Each of the artist’s canvases continues to work against the previous one even if they are all armed with the same language. In her own way and in spite of her springtime age the artist seems to tell us that contrary to popular belief painting is like hard rock and poetry: they are not youthful approaches. It is what brings to the act what is if not just another activity, that is to say it is what gives weapons to break the status quo. Painting is therefore an operator. And Claudine Loquen gives the perfect example of the painting of displacement. It is with this intention that it remains a working and therefore living mechanism. Jean Paul Gavard-Perret, Art critic .