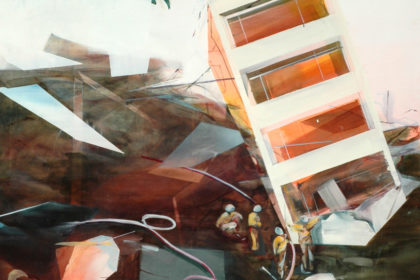 Aurélie Tomas Bouil, born in 1976, lives and works in Paris. After training at the Glacière de la Ville de Paris workshops and a degree in plastic arts (University of Paris I), her paintings were selected and exhibited at the Salon d’Art Contemporain de Montrouge, at 104 and La Villette, at the Salon Jeune Création (Paris 19th) and at La Belleviloise. In her paintings, Aurélie Tomas Bouil proceeds to a game of construction and deconstruction in which figurative space confronts pictorial space. This construction involves the assembly of simple unitary plastic forms. Thus the mountain, the house, the sky, the water are recurring elements that construct her landscapes. The deconstruction is similar to flat areas, coverings that bury the initial information and reshape the landscape like disasters. The superimpositions, the coexistence of realistic and schematic forms introduce disturbances in the perception of the figurative space and make an ambiguous reality emerge. The plastic composition then reveals a strange and unreal fantasy landscape. This marvellousness is akin to nostalgia for a “pure”, original, timeless nature. An art of painting that allows him to create a fictional space that questions man’s relationship with this nature and the mythical character that it has taken on.