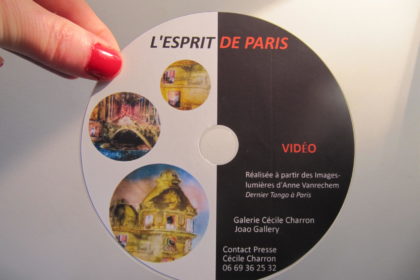 The spirit of Paris stages districts of the City of Light through the filter of the cinema. By exploring the question of illusionism through film effects, visual artist Anne Vanrechem questions the cinematographicity of a work and offers a dreamlike view of her city, Paris. The artist presents a series of Images-lumières whose technique is inspired by pre-cinema, accompanied by a video device produced in collaboration with Annie Mercier, ethnologist-filmmaker, as well as a soundtrack designed with Olivier Favre, musician. “To be from Paris is not to have been born there, it is to see clearly. “This sentence by Sacha Guitry announces the tone of the exhibition, which invites the viewer to explore borders that are often intermingled and overlapping. Between day and night, visible and invisible, dream and reality, conscious and unconscious, the artist’s cinematic universe downloads the spectator into a visual magic to which cinema is intimately linked. Combining photography, painting and pre-cinema, Anne Vanrechem’s Images-lumières revive the optical illusions invented by the precursors of the cinematograph. Games of transparency and cross-fading create the illusion of movement. The artist plays on the aspect of day and night, but also on the rhythms of light that provoke the appearance and disappearance of subjects in the image, changes of colour, material effects, shadow zones. The light, the material that unites day and night scenes, is directed in such a way as to create a dramaturgy. Different visions are then offered to the spectator. The Light-Images function like a television set. They come to life inside a backlit frame where coloured and chiaroscuro rhythms create a visual symphony. The centrepiece of the exhibition, Dernier Tango à Paris, inspired by the 1972 film by Bernardo Bertolucci, is presented in the form of an installation linking the Images-lumières and their cinematographic extension. A video, projected alongside the work, explores its details and transforms it into a narrative whose sound dynamics are based on dialogues from the film orchestrated in a musical composition. By associating images belonging to different media and temporalities, Anne Vanrechem creates a symbiosis between reality and fiction. She takes photographs of film locations and produces image captures of film characters that are integrated into the work. She also sets the scene herself, following the Parisian roads and railways, opting for an angle of view that offers a depth of field. Drawn from the world of cinema or music, the characters are moved from their original context. The Beatles cross streets of the 20th and run in those of the 18th, Audrey Hepburn walks on a platform of the Javel RER station, Maria Schneider and Marlon Brando kiss under the Bir Hakeim bridge… The soundtrack of the exhibition is composed according to the same principle of collage and montage reviving the sound memory of the 7th art. Dialogues taken from the film Dernier Tango à Paris are followed by musical compositions integrating lyrics from French films of the 30s and 40s and standards between jazz and Beatles interpreted by Minnie Picoux. As improbable as they are real, the light, video and sound images of this exhibition tell —->> the spirit of Paris.