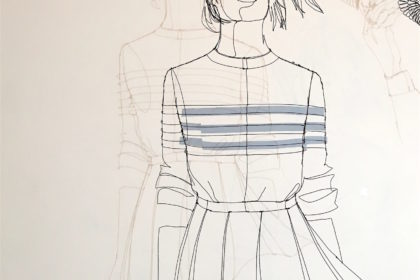 ILLUmine – ILLUsion // Alexandre Bour
Rendezvous in the gallery for the Nocturne of 14.06 in collaboration with the Jeudi Arty to discover the aerial works of our fetish and poetic sculptor Alexandre Bour.

Alexandre Bour’s sculptures are composed of raw materials and installations of light playing on cast shadows. As transparent and yet inhabited, his works float in weightlessness. By suspending these silhouettes of metallic threads, the artist creates a world of softness and lightness. The prowess of his technique is enhanced by the play of chiaroscuro which reveals the delicacy of each piece, while revolutionising the way we conceive of works of art. He composes with elusive elements such as shadow and light. Alexandre Bour delivers with gentleness the subjugation of the wire. Tamed by the lightness of a craftsman’s touch, the wire bends, dances and curves under the hands of its creator. The final object after this battle of materials takes the form of aerial installations of suspended figures, made of metal, shadow and light, which transcend the spectator’s perception of space. This French sculptor stages a skilful choreography mixing both the future of the intertwining wire and the gestures of the curious who waltz around the object to discover it in all its facets. So when the spectator contemplates these characters twirling in the air, his or her gaze is also transcended by the parallel presence of the shadow reflected on the wall, creating a subjective perception of several interacting realities. This “shadow-reflection” is also called “skia” in ancient Greece. The doubling of the line induced by the cast shadow gives a dynamic reading from two different points of view on the same object. The sculpture becomes a real drawing in space, it is then thought in terms of structure. The production of these sketches in volume is the result of a complex work of projection, passing through the reciprocal influence of technique and drawing. This artistic practice hides a meticulous and delicate work. This re-introduction of shadow as an integral component of the art object refers to the myth that was the precursor of the history of figurative representation. A few centuries B.C., the story is told of a young girl from the village of Dibutade who, in order not to forget the face of her lover going abroad, “surrounded with a line the shadow of her face, projected on the wall by the light of a lantern”. In fact Alexandre Bour with romanticism and virtuosity captures the movements of the body to give life to stories and characters that seem to come straight out of a dream. The artist realistically represents faces, bodies but also fauna and flora. The harmony of the lines brings out the rightness of expression. His characters have an anecdotal character, staged like micro stories. The artist thus offers an invitation to travel to those who look at these works.